East Spanish mountains (Puertos de Tortosa-Beceite Natural Park and Maestrazgo) near the sea, where the weather is very mild, although this does not prevent from forming of a rough and rugged landscape where the hunter can fully enjoy the hunt in his pure state. 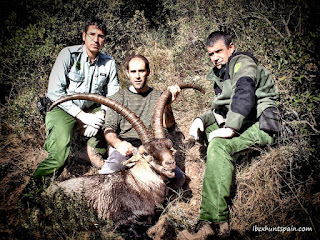 PYRENEAN CHAMOIS, ISARD (RUPICAPRA PYRENAICA PYRENAICA). Takes the name from the spectacular Pyrenees Mountains between France and Spain and boast a considerable population.  Their horns, of the shape of a hook, constitute an attractive trophy, being one of the most elusive mountains animals. 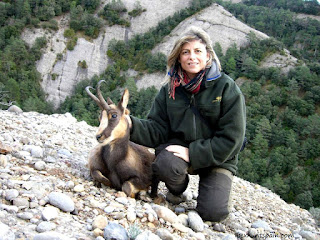 The Roe Deer is a relatively small deer, with a body length of 3.1–4.4 ft, a shoulder height of 2.1–2.5 ft, and a weight of 33–66 lb. It has rather short, erec antlers and a reddish body with a grey face. Its hide is golden red in summer, darkening to brown or even black in winter, with lighter undersides and a white rump patch; the tail is very short 0.8–1.2 in, and barely visible. Only the males have antlers. The first and second set of antlers are unbranched and short or 2.0–4.7 in, while older bucks in good conditions develop antlers up to 8–10 in long with two or three, rarely even four, points. When the male’s antlers begin to regrow, they are covered in a thin layer of velvet-like fur which disappears later on after the hair’s blood supply is lost. Males may speed up the process by rubbing their antlers on trees, so that their antlers are hard and stiff for the duels during the mating season. Unlike most cervids 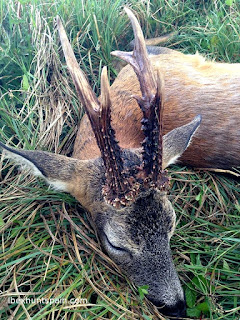