NORTHERN SHEEP  By: My friend  Alexander Sharif
Winter 2012
“A sportsman may have hunted deer, turkey, elk and bears for years with the greatest of success; but until he has taken his sheep, until he has matched his brains, his endurance and his skill with those inhabitants of the rocky peaks, he is still but a sophomore.
A big ram head on the wall of his den is the diploma of the graduated big-game hunter”
Jack O’Connor 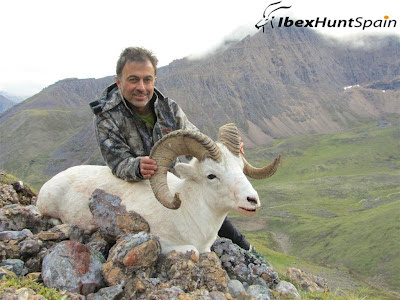 My “Anniversary Ram”, taken fair chase on a steep mountain side was 10 ½ years old and had 36” symmetrical full curled broomed horns. To me, he is the world’s greatest trophy.
My cousin once said: “until you have killed a sheep in North America, no one takes you for serious”. Others including Jack O’Connor, the dean of America’s gun writers have eluded to the same in the chapter on desert sheep in “Game In the Desert” (See above quote) There is definitely some truth behind this as for the average Joe, the effort and the cost associated with a sheep hunt usually comes later on in life when all is “somewhat settled”.
I grew up in a sheep hunting family with both my dad and uncle taking numerous heads of Urials, Reds, Armenians and Beozar Ibex. As a twelve year old youngster, I took a two-year old young Urial ram but then after, a myriad of “excuses” including attending boarding school abroad followed by higher education, an engineering career that involved international travel and finally starting a family kept me away from sheep hunting until my late 40s. When I finally hit the half-century mark last March, despite being in good physical shape, I made the unanimous decision that it is now or never.
Living on the Eastern slopes of the Canadian Rockies, I have chased rocky mountain bighorns (so far to no avail) but have also felt that in time, I will get my hands on one. However, connecting with the beautiful “White Sheep of the North” had always been a dream of mine, influenced of course by the writings of who else but the late Jack O’Connor.
From a financial standpoint, the cost of any North-American sheep hunt quickly shoots into the stratosphere when you include all the associated costs that go along with it. Having said that, being flexible to leave on a moment’s notice, a last minute cancellation hunt with huge savings can be had through certain outfitters. 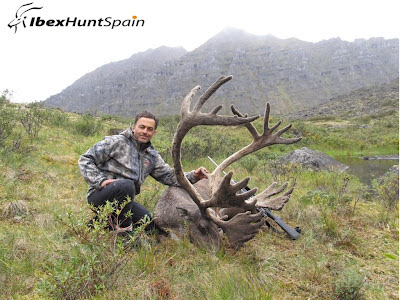 The author in the company of his “Black Mamba” and a beautiful Mountain Caribou.
With my contact information left with four Yukon outfitters and the green light issued by my CFO (My dear wife Eneida) , I left the entire month of August 2011 open for a chance at a cancellation hunt. Finally, on the evening before departing for our annual family camping trip, I received a call from Allan Young of “Midnight Sun Outfitters” that a cancellation hunt had become available for mid-August. Arrangements were made and I was now only three weeks away from realizing the hunt of a life time.
In preparation for this hunt, besides engaging on my everyday physical activity which includes an average of 200 days on my mountain bike, XC skis, chasing upland/big game and mountain hikes in the nearby Rockies, I started packing 50 lbs of rocks on all the family and solo hikes during the Summer months. You had to see the expression on some Banff tourists when I popped the rocks out of my pack to reach for my sandwich at top of the Sulphur Mountain in July.
Finally on August 10th2011, the twin turbo Hawker Sidney carrying me and my gear landed at Dawson airport after some nine hours in the air and on land due to poor visibility. Luckily, I was able to call the charter flight company from Inuit to let them know that I was cruising the skies and that my flight had been delayed due to poor weather. The worst nightmare of my hunt was also about to happen as I stepped out of the Hawker; My luggage including my riffle did not make it to Dawson! All I had on me were my boots, my camera and my binoculars.
With mixed emotions, I hopped on the chartered Islander with three other hunters and a young cook/wrangler from Alaska that was coming to help Allan. Our seventy minute flight to Hart Lake had us meander up and down through low clouds and several ridges but also through some spectacular scenery, finally landing safely on the dirt strip. I kept telling myself that things will somehow work their way out. Upon arrival, I borrowed the essentials including size 36 pants (I wear size 30 and more on that later), a rifle, sleeping bag and even a used toothbrush from Allan and his son Logan. That night I hardly slept, thinking about how I was going to pull it all together without my borrowed gear.
The morning after, we stepped in to Allan’s Supercub on floats, headed to sheep camp “LL” where my young/educated guide named Neil whom I was to share my hunt with for the next 10 days was waiting for me. Just before our take off, I spotted a beautiful bull Caribou on the opposite shore of Hart Lake and showed him to Allan. He asked me if I wanted to shoot the bull, but I found it anticlimactic. Then suddenly, I remembered an older gentleman with bad knees who was with us in the Islander the day before and had come from Fresno, CA to look for a bull Caribou. We turned around, informed the guys back at camp about the bull and the hunter went out later that day and killed that big bull. (Good Omen) 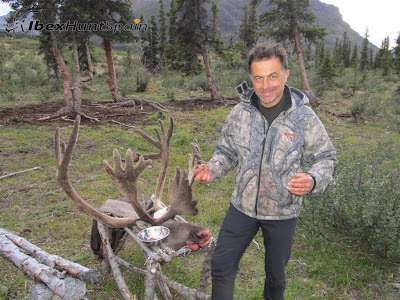 Here is a toast to my late Dad & Uncle who taught me how to respect and enjoy what Mother Nature has provided for us in the great outdoors. They are in Ram Heaven where every Ram is a full curl and every Billy has a white beard.

After a smooth landing at camp “ LL” and a six-hour mandatory wait, Neil & I packed our rug sacks and went for a scouting trip. A huge grizzly Boar and a few heads of lambs and ewes is all we saw that day. A supper of Caribou steaks cooked on camp fire next to the gorgeous lake made for a splendid first evening.
On day 2, we packed our stuff, broke our fast and were trail bound by 7:00 am. I should mention that this time of the year, Yukon mornings are mostly foggy and the best hunting is usually done in the afternoon and evening hours. After a three hour hike in the bough up the valley and having wet feet (100% waterproof boots are a must), we spotted three rams on the side of a nasty cliff that Neil called “The Island”. Through the 45 power spotter, one of the rams seemed to be legal and required a closer examination. Our only approach was through the Alders and we were on “all fours” for at least 500 yards. The knoll that would now hide us from the rams provided an opportunity to glass at them again. Unfortunately, we could not be 100% convinced that the largest ram was legal as we could only confirm one broomed horn and thus made the decision to abandon the stalk. Although I had come to Yukon for sheep, my hunt also included a Mountain Caribou and later that day, we hiked a different ridge and glassed for hours in hope of finding one. 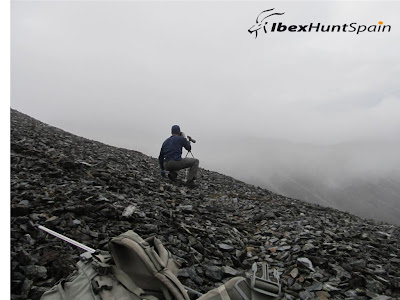 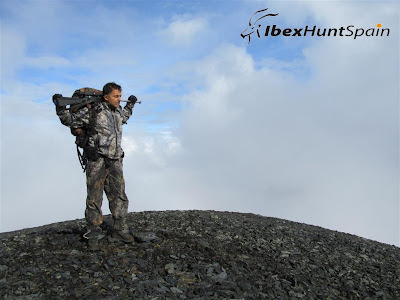 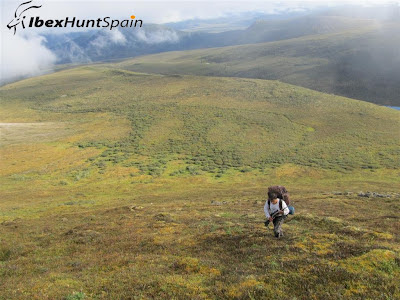 Yours truly with borrowed gear, climbing to gain altitude in Yukon’s North Eastern Sheep country.
With gazillion pictures and a couple of video clips stored in my little Digi, we caped and quartered the beautiful ram and started our descent down the grassy wet slopes with full packs at 10:00 p.m. The last hour we were in complete darkness and the thought of encountering that grizzly that we had seen earlier in the day made for a “spooktacular” journey. We arrived to where we had tied our four legged friends whom we had also worried about during the day. Logan carefully changed our return route back to camp to avoid any grizzly encounters. The two and a half hour ride had us screaming “anti-bear” slogans with a loaded rifle riding next to us in the scabbard. Upon arrival at camp at 2:00 am, I made a huge bonfire, parked my ram head next to me together with my Black Mamba and ate my mountain house supper. I stayed up until day light broke to guard my beloved trophies against any intruding wolf or bear. Next day, after some rest and a good grub, we packed all our meat and gear and started the 8-hour trail ride to camp “3B” where Allan had promised to pick me up at the end of day 9. Our ride took us through some spectacular scenery, sights that I had only seen in National Geographic shows. The only difference this time was that I was in it instead of just watching it on the tube! On our last stretch, we motored through some nasty bough infested with mosquitoes. I felt extremely sorry for our four legged friends who were fighting the terrain and the little critters. The next day and a half was spent fishing, resting and dining on sheep ribs and sheep shish-kabobs rigged up using alder branches as skewers, and fleshing my ram cape together with catching up on my journal.
The buzz of the Supercub just before supper on day 9 pretty much indicated the end of my Yukon Odyssey. Upon landing at Hart Lake, we had Graylings and sheep burgers for supper and I got to finally sleep on a foam mattress and exchange stories with other hunters who were still in camp.
On day 11, John’s blue/white Islander safely touched down at Hart Lake around 2:00 pm. We said goodbye to Allan, Logan and the rest of the gang and once airborne, I said my final farewell to the beautiful Ogilvie Mountains of North East Yukon. 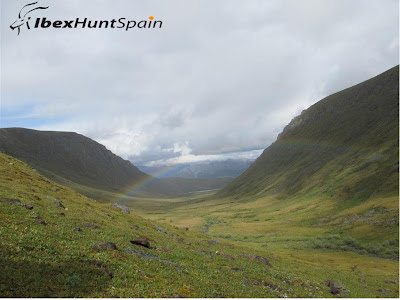 The Ogilvie and the Werneke mountains of North East Yukon hold some of the most spectacular wilderness on the planet.

Even though I had hunted in Africa, North America and the Elburz Mountains of Asia, this was by far the most outstanding wilderness experience of my half a century life and as my good friend Brad O’Connor put it; “You made lemonade out of lemon, got yourself a fine ram and your pants didn’t fall off”!
As I am writing these broken lines next to my beautiful wife and our two handsome sons and staring at my Ram’s head, (taxidermied swiftly by my relative Nouri Tajbaksh in Texas), I ponder upon the idea of someday completing my FNAWS. Am I being realistic? Probably not. Can I still dream about it, you bet ya? 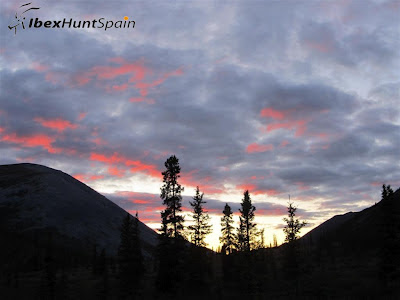 The Crimson colours of Yukon evenings is etched in my memory for ever. 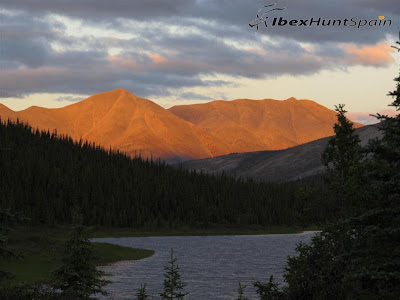