The high mountains, from the point of view of a hunter, a nature’s lover like me, are so grandiose, especially when it is about the Pyrenean chamois (really magnificent animal) hunting, which in this case I consider like a unique experience.
After I have had hunted two magnificent ibexes in Sierra de Gredos; we have hired for that a hunting company Ibexhuntspain, we set out towards the Pyrenees with an illusion to hunt two chamois. The manager Valeriano Belles was waiting for us in the village to guide us in the last stretch till the hotel where we had to be accommodated. As soon as we came we went to eat and to prepare for the first contact at dusk with this immense place and its small inhabitants with horns.
First we had to wait for the local government’s forest keeper to check our licences and just after we set out in two cars towards a prey, situated at the end of a road. From there we have started the first groups of chamois in the both sides of the road, although the animals were still too far.
We’ve decided to split up into two groups. Steve and Valeriano had to go to the mountains situated in the west and me and Fernando, a guide of Ibexhuntspain, we took a way to the mountainside in the east.
Each one of us took its backpack and wished the rest to have a good luck. To tell the truth I was feeling very calm. We started to climb a steep slope full of crumbly rocks and slippery grass. Each step was an exhausting effort and together with a height and as a consequence lack of oxygen it was becoming a real torture for a body out of shape. 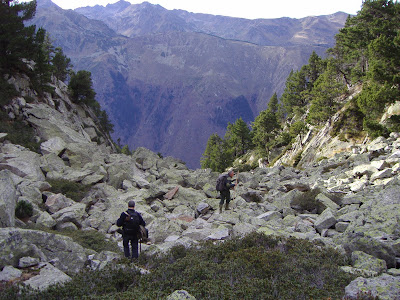 At last we stopped and we lied down on a ground. About lying down it’s just a manner of speaking as we were in the same vertical position as a picture hanging on a wall due to a slope of a land. During quite a lot of time we were observing a terrain through the binoculars till we have started to feel the pain in the neck as a position we were in was very uncomfortable.
After more or less one hour we have heard two shots in the far followed almost one by one. A good male has risen above us, but Fernando told me it was too far to shoot at it. A noise like the one of a distant shot makes an animal to move little by little towards a peak of a mountain. Later on we have found out that it was Steve, who was shooting at the animal, but it was too far away and he missed the first shot, as a consequence the animal raced away and it complicated a lot a second shot.
Fernando explained me that we have to go up along a rock crest and maybe we will be able to shoot the same male and in case it’s not possible we still can look at the other slope. Since the animals didn’t pass through where we were now, they should be there. Indeed, after a short but steep ascent Fernando leant out of a ledge and gave me a sign to come closer, as there were the animals eating peacefully.
In this moment my heart started to dance to the different rhythms as I was approaching. So in the same instant to lean out with a gun in one hand my heart has left behind a waltz to pass to an uncontrolled rock&roll. I took a deep breath and I put in order my thoughts trying to control a situation. 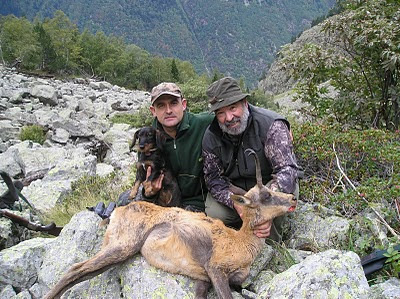 Fernando was on my left, he indicated me one chamois of a light colour eating under one rock, above it there was another darker one. I could understand what he was trying to tell me and when the moment came I’ve put a gun on a backpack I have left on the rocks. I look at a marvellous Pyrenean chamois; I was feeling that a sight was moving a little as I was nervous at this exciting moment. Without any hurry but also without making any pause I decided to lean out a little bit more so I could have a perfect position to shoot. I focused the animal; I was breathing and caressing a trigger. The bullet has come out and I knew in advance I did it I hit it. Almost immediately I saw how the beautiful male has fallen down.

I was a leading actor in my own movie; I lifted a gun, pulled the bolt back and I said: “that’s all”. At once Fernando congratulated me with killing a good Pyrenean chamois male. I thanked him and we gave each other a strong hug. We were going down through the rocks, ravines and cliffs towards the animal. We picked it up and brought it down to snowdrift. There for a moment we were discussing this great event.

We had to continue with our work. At first we took some pictures to memorize this great moment and we carried on with a butcher work taking off the skin and cutting some meat for a splendid stew, as this meat is very valued by local people.
The night caught us in the mountains. That complicated the descent through the huge tracks full of stones. I was going down slipping and trying to brake with a help of a long stick Fernando gave me. We took a shorter cut to come to a car, which was left in the prey in one side of a road a little bit more down. 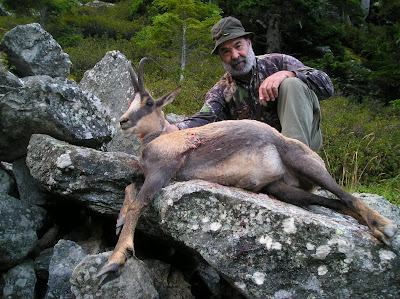 In a moment we met head on with Valeriano and Steve. They were coming to search for us and to find out how did it go, as they have heard a shot.
They saw the chamois and were congratulating me making good comments. During the supper we had a great conversation. Just after we had to go to bed as the next day we had to wake up at 5 a.m. to start a new hunting for Steve’s chamois. And we did it so. It was still dark outside when we set out. We left a car in a small village from which one comes out an ancient route the local ancestors were using to get to the zone of high mountains. Using a flashlight we were walking through the craggy paths which seemed to be endless. For me the way was even harder than usually as my friend Steve passed me his backpack as light as a feather weighing more than 30 kilos (you have no idea how heavy it was).
It was amazing when after walking around one hour a day has dawned and we saw we were totally surrounded by high peaks still covered with snow. 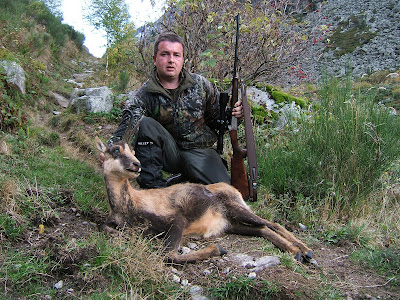 In a moment we noticed a pair of wild boars eating in a small meadow. It took them some time to feel our presence so we could observe them thoroughly. In a few time after Valeriano perceived one chamois in a high up of a slope not too far away.

Thus Steve and Valeriano decided to go after it and me and Fernando we stayed contemplating and filming the entry into the animal’s hunting. It was a male. It was eating and it wasn’t aware of anything. They approached close enough, but it was difficult to lean out between the rocks taking out half of the body in a way that it was almost hanging over a void. Steve got ready to shoot, everything seemed to be perfect. The male was still eating. Steve didn’t look very comfortable but anyway he shot and he missed. The animal made few jumps and it disappeared between the rocks. Hunting is hunting and stress doesn’t forgive.
After walking a lot and making out different chamois in the inaccessible height, we went towards one snowdrift where there were few animals. But going up a craggy and slippery slope covered in mud we realized that in a mound at our back one chamois was watching us laid down on a rock. Valeriano observed it carefully and said it was a good specimen. Thus it was decided that Valeriano and Steve are going to make an entry meanwhile Fernando and me we stay still in front of it with a camera. In this way the chamois could watch us and it would stay quite. For the time being it didn’t move from its place. I was filming how they were approaching and searching the approximation of 150 yards. They were looking for a fulcrum and Steve despite the distrust caused by the failures in his last shots took two new ones. With a second shot he corrected a trajectory to put an end to this exciting event. What a great shot. He did it! 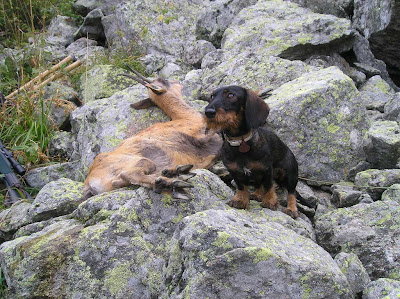 Valeriano congratulated him. We came close to take some pictures together and to discuss how opportune was the shot, as they have shown us how far, o rather how very far we would have to go to continue the hunting. It would take us for sure all the day and a part of a night. Later on they prepared the animal and loaded it to the backpacks.
We were returning slowly full of joy.
I was thinking: “It is so wonderful to hunt near the clouds”
I want to thank Valeriano and his team for doing their work in such a professional way and to make sure we could fully enjoy these so happy and really divine moments.
Pyrenees (Spain), 23-24 of March 2010.
Thomas Schulze & Steve Leuven
From United Kingdom
Valeriano Bellés 2010-11-04T20:26:00+02:00 November 4th, 2010|Categories: Ibex Hunt Spain|Comments Off on Pyrenean Chamois Hunting in Spain | Hunting chamois in Spain | Ibex Hunt Spain